I think nearly everyone’s childhood has involved having pizza as some kind of treat, whether it was at a birthday party, for takeaway dinner or, as we got older, when we had friends around.

As we get older, though, that nagging voice at the back of our head tells us that we should make healthier choices – so when I came across this version of mini pizzas which uses eggplants instead of a traditional pizza bases, I was keen to try it out.

You can use a wide range of toppings on your eggplant mini pizzas, I used the following optional extras:

Other optional extras (that I have thought of):

Step 2:  Slice the eggplants into 1 inch thick slices (either circular or lengthways – I prefer circular slices). Then place the eggplant slices onto the prepared baking trays, spray the slices with olive oil and sprinkle with salt and bake in the oven for 15 – 20 minutes.

Step 3: Remove the baked eggplant from the oven.

Step 4: Spread approx. 1 teaspoon of tomato sauce on each baked eggplant (try to cover it as evenly as possible and across the entire eggplant slice).

Step 6: Place the eggplant slices (now made up with all ingredients) back onto a tray and back into the oven for 3 – 8 minutes or until the cheese has melted. *Note keep a close eye on the eggplant as it can burn very fast and then all your hard efforts will have gone to waste! Also make sure you have paper baking under the eggplant otherwise the melted cheese will go everywhere and will be really annoying to clean! *Note if you are using lactose free cheese/vegan cheese you may need to keep the eggplant mini pizzas in the oven for longer for the cheese to fully melt.

Step 7: Serve while hot (but not burning). *Note it is a good idea to serve with napkins as, like with pizza, it can be a bit greasy.

Step 8: Each individual person can season with a little salt and pepper if they would like :).

Step 5: Decorate your eggplant slices and place back in the oven. 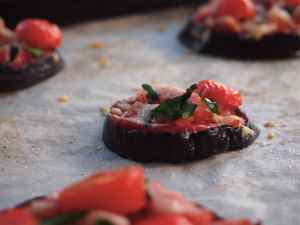 Step 7: Take eggplant slices out of oven, allow to slightly cool and eat!

This goes well with basically anything and would be great to serve as an appetizer, main meal or even just as a snack, depending on how many you make! I think this is a great one when you are having lots of people around  as you can mix and match the ingredients very easily and it can be put together with minimal effort and time while other things are going on around you. You can cover most food intolerances and preferences very easily by just omitting and changing what is on the pizza – how easy is that? It is also a very easy recipe to do with the help of little kids!

I did try this recipe out with lactose free cheese and it still worked out rather well.

A tip for POTSIES – if you need to get your salt intake up a little further for the day, try to choose toppings with higher salt content such as sun-dried tomatoes, salami, cheese and olives. You can also always sprinkle a little extra salt on top once the mini pizza’s are out of the oven.

P.S This recipe is the brains of Eat Good 4 Life and has been altered.

P.P.S Be careful when you hold the pizza as it isn’t as sturdy as a typical pizza.